Hart Field has been named for William Ewart Hart, a Parramatta Dentist who, on 18 November 1911, made the longest cross country flight in Australia from Penrith (Belmore Park) to the Sydney Show Ground  in a Bristol Boxkite, a distance of 76 kilometres.

This flight was Hart’s second cross country, the first being from Belmore Park to Parramatta Park with his brother Stanley “Jack” as his passenger fifteen days earlier.  Bill  had only piloted himself for the first time on the previous day!

Hart also opened the first flying school at Ham Common (now Richmond RAAF base) and was the first licensed pilot in Australia.

JJ Hammond and Leslie Macdonald had both made earlier XC flights from Holsworthy and Ascot Park.

Hart Field is located in Russell Street, Emu Heights and is a purpose built electric powered model aircraft flying field which complies with national and international recommended safety standards. It is a beautiful place to fly model aircraft especially in the early mornings.

Visitors and prospective members are welcome at our club. Pilot members of other clubs (AMAS or MAAA affiliated) who wish to fly at Hart Field are also welcome. All visitors must be accompanied by a member of our club so if you do wish to come out to Hart Field please contact a committee member to arrange your visit. 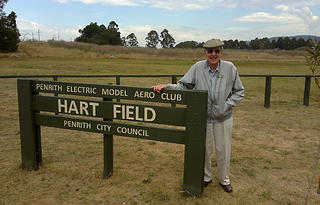 Left.. Keith White, Historian and Member of the Aviation Historical Society of Australia visits Hart Field. Keith a WW2 Liberator ball turret gunner is regarded as the expert on William Hart and we were very honoured to have him visit us.

Right.. William Hart prepares to take off from Belmore Park on his historic flight from Penrith to the Sydney Show Ground in November 1911.
(Photo courtesy of National Archives) 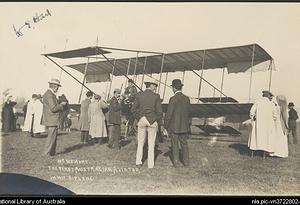 Hart Field is the culmination of the dedication and hard work of the club’s members​.

They have done a magnificent job of creating one of the best model flying fields in Sydney and improvements are continuing all the time.